By Jennifer Provenza at Good Food From The Heart

This dessert is so incredibly rich that you won’t believe it’s vegan! In fact, it’s super easy to make and will impress guests for any special occasion. It’s even kid approved! Just like regular mousse, it’s airy and light with a whipped cream quality, yet it’s totally dairy free and eggless.

Coconut Milk: For this recipe, you will need to use full fat coconut milk.

Liquid Stevia or Maple Syrup: For a fully sugar free dessert, use the liquid stevia. Otherwise, the maple syrup will give you a delicious result.

Shredded Coconut: The optional shredded coconut adds a pretty touch, but is not necessary.

For the coconut milk: For a much lower calorie version of this dessert, you can actually whip up the liquid in a can of chickpeas (known as aquafaba). You may have to whip it in a mixer for up to fifteen minutes, but at that point, you can use it in the recipe. This version will be more airy and less rich, but still delicious.

For the liquid stevia or maple syrup: Feel free to use the sweetener of your choice, just check the conversion amounts.

Yes, usually! Check the ingredients just to be sure.

What is vegan mousse made of and will it taste as good as traditional mousse?

Yes! In my opinion, it’s even better! Regular chocolate mousse is not vegan as it contains egg whites or whipped cream. This eggless chocolate mousse only uses three ingredients: coconut milk (or aquafaba), stevia or maple syrup, and dark chocolate.

How can I store this?

You can keep this in the refrigerator for up to three days, but be sure to let it sit at room temperature for about an hour before serving or it will be quite hard. (This is only an issue with the coconut milk version).

Why isn’t my chocolate mousse fluffy?

You may need to let it sit at room temperature if it has hardened. This mousse is best made and served right away.

How To Make It

This dark chocolate coconut mousse is super simple to whip up in a few minutes. I like this Thai Kitchen brand.

Chop the chocolate bar and melt, either in the microwave at 10 second intervals (stirring between) or on the top of a double boiler.

Next, separate out the coconut cream that has risen to the top of the cans (don’t include the thin, watery liquid beneath) and whip in a mixer until stiff peaks form. Remove and mix with the melted chocolate. Add the liquid stevia or maple syrup, top with the coconut, and serve. You could also top with berries or more whipped coconut cream.

If you want to make a lower calorie version, feel free to substitute aquafaba for the coconut cream. Aquafaba is simply the liquid in a can of chickpeas. Save the chickpeas and set aside for later. I like to season them and cook them in the air fryer for 15 minutes at 370 degrees for a tasty, salty, crunchy snack.

Put the aquafaba in a mixer and beat until stiff peaks form. (This will take around 9 minutes but could take up to 15). Then fold into the chocolate mixture, add your liquid stevia or maple syrup, and put into individual serving cups.

Note that if you prepare in advance and refrigerate, you will want to remove this dessert from the fridge about an hour before serving, or it will have hardened and lost its creamy texture.

You can double this recipe easily. Also, keep in mind that while you won’t end up with a very large amount of mousse, this recipe is very rich, so serving sizes can be pretty small. This would make a great dessert to serve after my Fresh and Festive Pesto Pasta. This would also make a delicious vegan chocolate mousse cake if you use this as mousse as frosting or filling. If you love chocolate, be sure to also try my Peanut Butter Chocolate Swirl Mug Cake and my Award Winning Vegan Fudgy Chocolate Brownies. 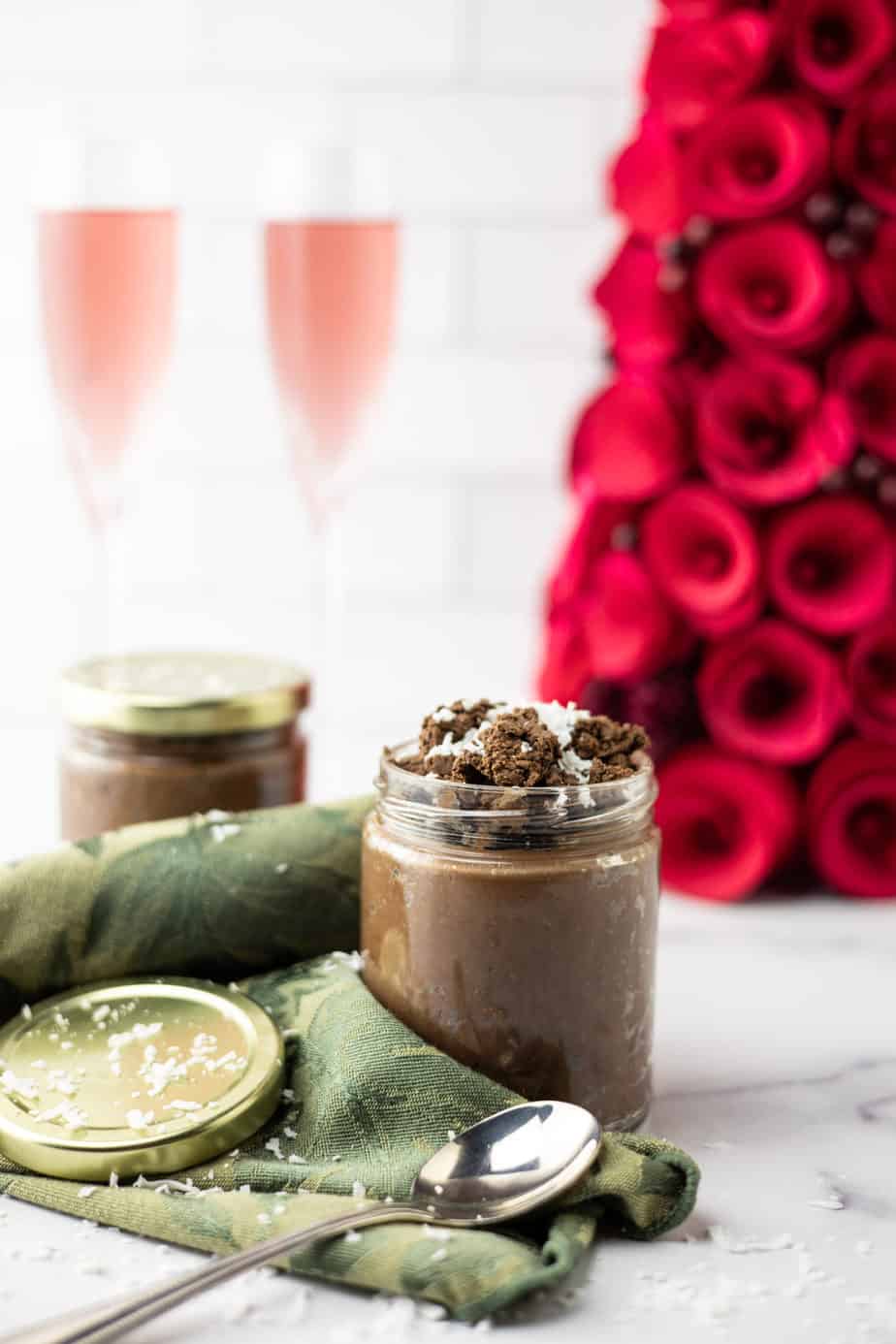 This makes a very rich, dark chocolate mousse. If you want it to be sweeter, you could add some coconut sugar to the coconut cream before whipping it up. For a healthier version, you could also use aquafaba instead of the coconut milk. (Just use the liquid from one can of chickpeas and whisk in a mixer for about 9 minutes, until stiff peaks form.)

Delicious and Nourishing Food Made With Love

I created this blog as a way to share my love of healthy cooking that also, (and frankly) most importantly, tastes absolutely delicious! All the foods on this blog contain completely whole foods plant based ingredients. This means I make them from unprocessed, plant based ingredients and do not include oil or refined sugars. Many of these recipes are gluten free (or have easy gluten free subs) and many are nut or soy free as well (or can easily be made so).