This vegan caramelized banana French toast has a sweet, caramelized, pan crisp exterior, and a soft, melty, vanilla and cinnamon center. With no dairy or eggs, this anabolic French toast is reminiscent of eggnog and will keep you going all morning long.

Bring on the French Toast!

We are starting to get in the holiday mood over here, which is definitely making me crave yummy comfort foods like French toast. At the same time, I’m really focused on trying to eat healthy amidst all the holiday cookies and things that I’m planning on baking with my girls. If you feel the same way, this French toast is going to rock your world! French toast is (honestly) one of the more difficult recipes to veganize. People often have a lot of questions about it. Questions like, “Can you even make vegan French toast?” “Can French toast be healthy?” And even “Who even invented French toast and do they call it that in France?” Well, no worries, I’ve got you. Apparently, the earliest French toast recipe can be found in a book of Latin recipes from the 1st Century CE. (Sorry, I’m a teacher. I have to educate). And, apparently, in France they call it Pain Perdu (meaning “forgotten or lost bread”). Anyway, don’t worry, it is indeed possible to make a healthy, vegan French toast. And, guess what? This version is even better than what Mom used to make.

I am in LOVE with this Caramelized Banana French Toast. When I originally started eating a whole foods plant based diet, I found lots of good recipes for waffles and pancakes, but French toast…not so much. Some recipes used chia seeds, which made a great pudding, but seemed to turn out gloppy and gelatinous on French toast. Ground flax seeds are something I use all the time in baking in place of eggs, but again, for French toast, I ended up with a lot of visible, gooey flax seeds on the outside. Bottled egg substitute was passable, but took a long time to cook and isn’t carried in most stores around me, so I often don’t have it in the house. And…let’s face it, I need to be able to make French toast at a moment’s notice.

Bananas, though, what a revelation! I’ve used them as an egg substitute in baking, but somehow, I never before thought to use them for French toast. It seemed like they would be very…banana-y. It turns out, though, that very thing I thought would make them not work, is exactly what makes them work so well! I found that, when I cooked this banana-dipped French toast, the bananas on the outside of the bread caramelized in the pan and the result was absolutely out of this world. One bite of this French toast and I knew that I would be making a double recipe next time. The sweet, caramelized, pan crisp exterior, the soft, melty, vanilla and cinnamon center….mmm. I think I may just have to go make some more right now!

Bread: You can use any variety of bread, but be sure to choose a healthy, whole grain bread or a gluten free bread if necessary to keep this whole food plant based.

Plant Milk: This recipe calls for canned coconut milk, giving it a delicious, rich flavor. I use light coconut milk to reduce the amount of fat in the recipe, but full fat coconut milk works too.

Bananas: In this recipe, the bananas stand in for eggs. Even better, when they caramelize, they add a phenomenal flavor.

Rum Extract and Nutmeg: These ingredients give the french toast an incredible eggnog flavor.

For the bread: Use gluten free if you need to. You can also substitute sourdough bread.

For the bananas: Sorry, this recipe will not work without the bananas.

For the coconut milk: Use any other plant based milk you prefer, just be sure it’s unsweetened.

For the rum extract and nutmeg: You can substitute vanilla and cinnamon, which still taste great, but you will lose the eggnog flavor.

What kind of bread should I use to make this French toast?

You can use any kind of bread you like. Whole wheat French toast would be healthy and delicious, but you can also use gluten free bread if necessary or even sourdough bread. Sandwich bread works great, particularly if you like your French toast on the crispier side. Whole grain French bread would made for a softer, but also delicious, treat.

Can I really make French toast without dairy? What dairy free milk should I use?

This recipe works best using canned coconut milk. I use lite coconut milk, but full fat will work as well. For a less rich version, you can substitute any non dairy milk. For a really special treat, you could even use dairy free eggnog!  Any kind of non dairy milk will work.

Can I really make eggless French toast? What’s the secret?

The secret is the bananas! This recipe will not work without them.

Why does this recipe taste like eggnog? What kind of sorcery is this?

I discovered, by accident, that a combination of rum extract and nutmeg gives a delicious eggnog flavor. Try it mixed into sweetened coconut milk or vegan ice cream or whipped cream as well!

Why should I make French toast instead of waffles or pancakes?

I mean, obviously, it’s up to you, but French toast is faster and less fuss in general, which makes it perfect when you want something special tasting, but still pretty easy and quick.

Can I freeze this? Will it keep overnight?

You can freeze it after cooking it if you want to. Reheat in the oven to retain the correct texture or heat in the microwave for a softer result. You can definitely soak the bread in the mixture overnight and cook it in the morning.

Can I make a baked casserole version of this recipe?

Yes, you could soak the bread in the mixture overnight (or for a few hours) and then bake at 350 degrees until warmed through.

What makes this recipe anabolic?

If you use a good protein filled whole grain bread (like Ezekial brand) and make the no sugar option of this recipe, this is a great treat for those following an anobolic diet.

Is this French toast recipe good for people with diabetes?

Yes, this can be consumed by diabetics. Just be sure to use a whole grain bread and the no sugar options.

Start by putting the bananas and other ingredients in the blender. Then, dip your bread until it soaks up the mixture, pan fry on a low/medium setting until the bananas caramelize on each side, and serve. You can keep the slices warm in the oven on the lowest setting until you are done making all of them.

For a traditional French toast experience, top with a drizzle of warm maple syrup. And, while many people like powdered sugar or other very sweet options, you may choose to keep it even more nourishing and healthy with my Warm and Cozy Raspbery Syrup. Add some fresh fruit and a steaming cup of coffee (or two) on the side and you have a perfect breakfast. 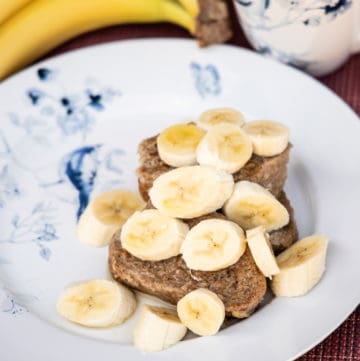 Delicious and Nourishing Food Made With Love

I created this blog as a way to share my love of healthy cooking that also, (and frankly) most importantly, tastes absolutely delicious! All the foods on this blog contain completely whole foods plant based ingredients. This means I make them from unprocessed, plant based ingredients and do not include oil or refined sugars. Many of these recipes are gluten free (or have easy gluten free subs) and many are nut or soy free as well (or can easily be made so).